We were saddened to learn last week of the abuse female sports reporters frequently endure via social media forums such as Twitter and in e-mails. The hate-filled messages, usually from men, include such things as wanting to see the women murdered, raped, or beaten by their boyfriends. Vile doesn’t seem a strong enough word to describe these taunts.

The video of the words being read aloud by uninvolved men to some of the female sports reporters in question is heartbreaking and infuriating. Who do the men behind these messages think they are? Besides lacking common decency, we know one thing they are not: informed.

Over the past three decades, journalists from print, radio, and television have interviewed our esteemed anti-doping guru, Dr. Don Catlin, countless times. Sometimes it relates to his experience directing the first sports anti-doping lab in the United States, the UCLA Olympic Analytical Laboratory, or about the many tests he’s developed to detect performance-enhancing drugs such as the first designer steroid, norbolethone; the T/E ratio test used to distinguish natural from synthetic testosterone; or THG. More recently, it often regards his experience overseeing the testing of dietary supplement products for the trusted third-party supplement certification program BSCG Certified Drug Free® or includes his insights about the use of drugs in the headlines such as meldonium, hGH, or FG-4592. 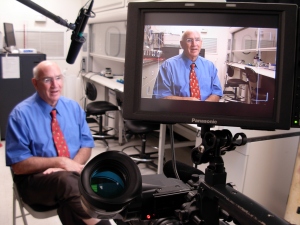 Interview with Dr. Don Catlin in 2008. Photo by Oliver Catlin.

Throughout this span of time, Dr. Catlin has been interviewed by hundreds of journalists of every stripe. Among just a handful who have stood out and risen to the top are Amy Shipley, formerly with the Washington Post, and The New York Times’ Juliet Macur, who wrote the newspaper’s story about the misogynistic messages. He has worked with both women on multiple stories over the years, and found both to be exceptional professionals.

In their own ways, Shipley and Macur have demonstrated themselves to be consistently fair, perceptive, thorough, and undaunted in asking a range of questions, doing extensive research, and covering subjects others might have overlooked or been intimated by. Their stories have been accurate, smart, and well written. In our eyes, these two women have helped lead the field of sports reporting.

Juliet Macur’s reporting of the doping challenges facing cycling outpaced others in the field and didn’t come about via conjecture, rumor, or bias as did some others’ work. Her subsequent book on Lance Armstrong’s fall demonstrated the breadth and depth of her reporting and writing skills.

Nearly 30 years ago in the 1980s, Amy Shipley contacted Dr. Catlin, wanting to know what his lab did and how they did it. He suggested she fly out to see how it all worked—and she did. The result was an extensive, in-depth piece on the science of anti-doping testing, including the use of gas chromatography mass spectrometry—not a typical topic for a daily newspaper.

In 2005, when Dr. Catlin discovered a performance-enhancing drug, the designer steroid methasterone, masquerading as a dietary supplement product, he reached out to Shipley to warn athletes. She broke the story that November, which reverberated through the industry, leading to a focus on pro-hormone supplements and ultimately an FDA raid in 2009 of Bodybuilding.com, which remains as one of the largest enforcement actions to date in the supplement industry. Methasterone was soon added to the WADA Prohibited List, and Superdrol and other similar supplement products containing the substance were eventually pulled from the marketplace.

The article prompted a loud response on the muscle boards and discussion sites, many of which included hate-filled messages and even death threats directed at Ms. Shipley and Dr. Catlin. A perfect example of the kind of vitriol that can come from journalism that pushes the envelope and exposes issues of concern to sport that also has larger impacts on the general public.

In 2006, two years before the first positive test result in sports, Shipley wrote of Dr. Catlin’s analysis of the new designer stimulant methylhexaneamine, which was being used as an ingredient in dietary supplements. Her exposé led to further evaluation of this dangerous compound, which was added to the WADA Prohibited List in 2009 and has since become the third most reported drug in the WADA system.

These are just a few examples of contributions female journalists have made to sport. Those who seek to offend and hurl scorn at female sports reporters need to be aware of the impact these dedicated, hardworking, and talented women have made in the sports realm. Shipley, Macur, and others like them, have more than earned a right to work in the field of sports reporting and deserve nothing less than our praise and our thanks for their fortitude and great work.