What drugs are athletes using to dope? This is one of the most commonly asked questions in the realm of sports anti-doping. Recently the answer has been provided in glaring form. During the week of July 29, Dr. Don Catlin, BSCG’s chief science officer and former longtime director of the UCLA Olympic Analytical Laboratory, was interviewed by the New York Times regarding a new drug called FG-4592, which was detected in tests of at least two elite cyclists.

AstraZeneca, one of the drugs’ developers, summarizes FG-4592 as “a small molecule inhibitor of hypoxia-inducible factor (HIF) prolyl hydroxylase. HIF is a protein that responds to oxygen changes in the cellular environment and meets the body’s demands for oxygen by inducing erythropoiesis, the process by which red blood cells are produced.”

FG-4592 is available in pill form and is orally active, unlike its cousin, recombinant erythropoietin, or EPO, which must be injected. Some have dubbed FG-4592 as oxygen in pill form. This new drug is a breakthrough for anemia treatment and other similar blood ailments. 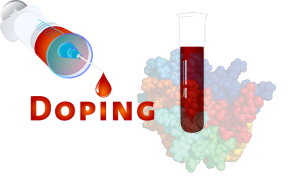 Unfortunately, an effective blood boosting drug in pill form is also the Holy Grail for endurance dopers. Though FG-4592 remains in third-stage clinical trials around the world, it is widely available as a research chemical on the Internet. Its apparent arrival in elite sport is troubling, yet predictable.

Similar to EPO, HIF drugs like FG-4592 help increase oxygen carrying capacity by spurring the production of red blood cells. Some researchers believe HIF stabilizers might be even more effective than EPO as they can help stimulate iron absorption and suppress the inflammation of cytokines.[1] FG-4592 was recently added to the WADA (World Anti-Doping Agency) Prohibited List for 2015, as have cobalt and other HIF stabilizers and activators in general.  No other HIF drugs are named though they would be prohibited if they are detected.

According to PubChem’s listing of Chemical Vendors, there are 18 suppliers of FG-4592 worldwide . One of the vendors, the Houston-based company APExBIO, has eight HIF-related biochemicals available on its website including BAY 87-2243, 2-Methoxyestradiol, PX 12, ML 228, KC7F2, Chetomin, DMOG, and its top seller, IOX2 (Glycine). On PubChem, there are 251 Related Compounds with Annotation to explore.

Recent positive drug tests of two elite cyclists suggest athletes have managed to obtain FG-4592 for use as a performance-enhancer. Though the chemical vendors listed on PubMed are not marketing the drug to athletes, another site does not seem as scrupulous, as it sells research peptides like FG-4592 alongside an array of “performance enhancers.”  Some research peptides at www.superhumanstore.com overlap the list of performance enhancers. Numerous drugs on the WADA Prohibited List are available on this site including Aicar, CJC-1295 (a growth hormone secretagogue), Erythropoietin-mimetic peptide 17 (EMP17), GHRP-2, Sermorelin, Thymosin Beta- 4 and more. Similar drugs are available that are not included on the WADA Prohibited List by name, like BAY 87-2243 and Follistatin 344 (a myostatin inhibitor).

professional cyclist in the UCI Tour makes $142,000, according to Ernst & Young.  Top riders can earn up to $5 million. Currently, the average dose of FG-4592 is recommended at 1-2mg/kg, 3 times a week, so $780 for 500mg will buy a two- week’s supply. An athlete could buy a year’s supply for around $20,280. This is a relatively affordable rate, even to an average Tour rider. With the difference between the average salary and the top salaries in elite cycling so significant, the financial incentives to use this new drug, or its cousins, remains high.

The good news is FG-4592 is detectable with drug tests. Similar developing drugs will undoubtedly be pursued and tried by athletes in the not-too-distant future. Whether these other options, particularly those not specified on the WADA Prohibited List, are detectable only time will tell. One thing history has proven, these will not be the last athletes to test positive for a new sports doping agent.

By Oliver Catlin and Joe Taylor